More Going On and On About Food

Lia of Clever Crow Farm Gets Photo Bombed by a Doomed Duck.

I killed a duck. Not only did I kill it by chopping off its head with an axe, I got up early Sunday morning and drove to Black Creek to do it, after hosting some backyard karaoke the night before (happy birthday, Meaghan!). Clever Crow farm was having a workshop and I figured there was never going to be a better opportunity for me to learn how to kill and pluck and gut a duck than that, plus it was only $35 and you got to keep the duck, so it was a bargain as well. 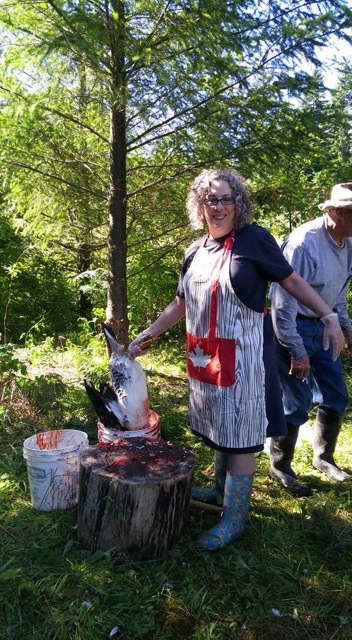 Contrary to What This Photo Depicts, I am Not a Psychopathic Duck Killer. I am Smiling Because I Overcame My Duck Killing Reservations in Order to Not Be a Carnivorous Hypocrite and to Be Closer to My Food. Respect.

Technically you didn’t have to kill your own duck if you didn’t want to, and at first I was going to let the instructor do it for me, but at the last minute I decided it would be hypocritical to eat the duck if I couldn’t kill it myself so I went ahead and did it. I would like to say I chopped off its head in one clean and sudden chop but it took me about 4 chops and I kept swinging harder and faster because I didn’t want the duck to suffer (I had been holding it for a while and we had become friendly). Also, maybe the axe I was using wasn’t sharp enough. It wasn’t as bad as what happened to someone else’s duck, whose head got only half chopped off before they lost their grip and it turned messy. It was people’s first time. Ducks, like chickens, keep moving after their heads have been chopped off so you are holding the duck upside down to drain out the blood and its wings are flapping around and blood gets everywhere. If you go kill a duck, make sure you are wearing old clothes, an apron, and rubber boots. 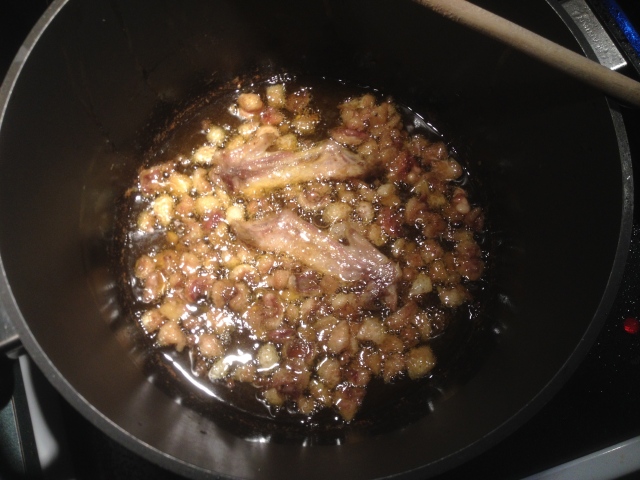 I made crispy skinned duck breasts, fritons (YUM!), and confit, plus I rendered a lot of fat so I have about a litre of duck fat mixed with olive oil and let me tell you, that stuff is delicious! I gave away the offal, feet and head to another workshop goer. I know duck tongues are supposed to be delicious but I’m not that adventurous of an eater and even the Foie Gras is not that palatable to me. 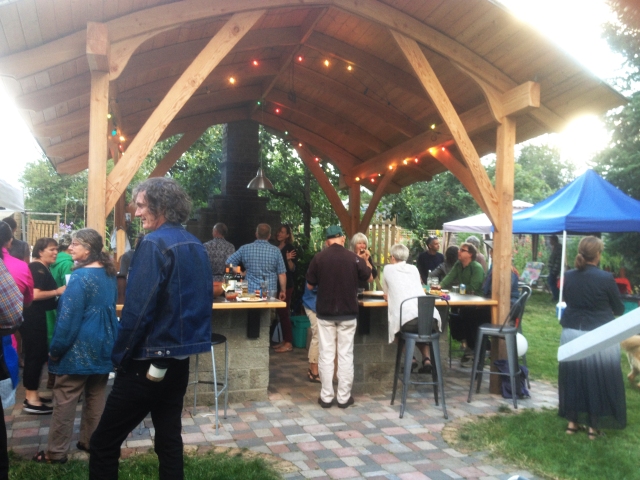 We took some of the confit to a pizza party in Fanny Bay where the hosts have a beautiful outdoor kitchen in their beautiful outdoor garden. I am happy to report we are finally getting invited to more parties so we are seeing areas of the valley we might not otherwise know about. Check out this view from a house in East Courtenay where we went to a barbecue (who knew?):

This is Your View When You Live on the Hills of East Courtenay.

I also called LeeAndra to tell her we were crashing the Tree Frog Radio anniversary party, so we spent some time on Denman Island. They have a new eatery called the “Chuck Wagon”, which is a stationary food truck on some farm land. It was good. Really good. And they have a charming ivy covered country store. Bruce and LeeAndra have a stone oven for pizza, too, and they produce their own food. Hippies have the best food, it’s the rule and the appeal of the lifestyle. 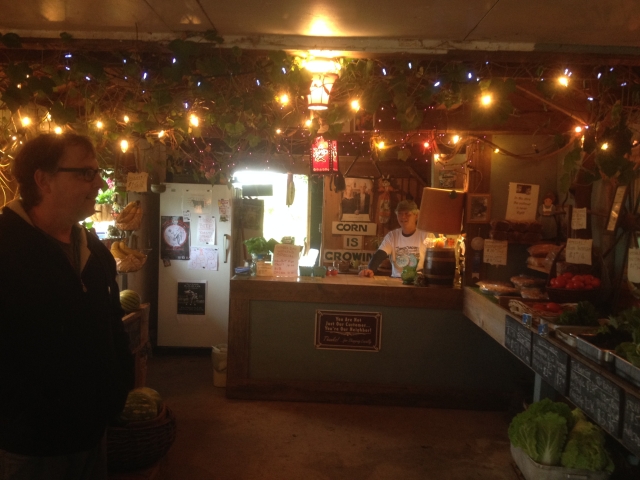 Farm Store by the Chuck Wagon

Someone told Step that the drought last year makes the cherries fight back this year, so there is a serious bumper crop going on. I had to stop offering to pick fruit for half because we can’t process all these cherries! (And this year people are being fined for not picking fruit because of how it attracts the bears). We have frozen cherries for pies, made cocktail cherries in booze, made sour cherry shrub (so good!), and I have about 3 litres of cherries  vodka. It’s a cherry year. 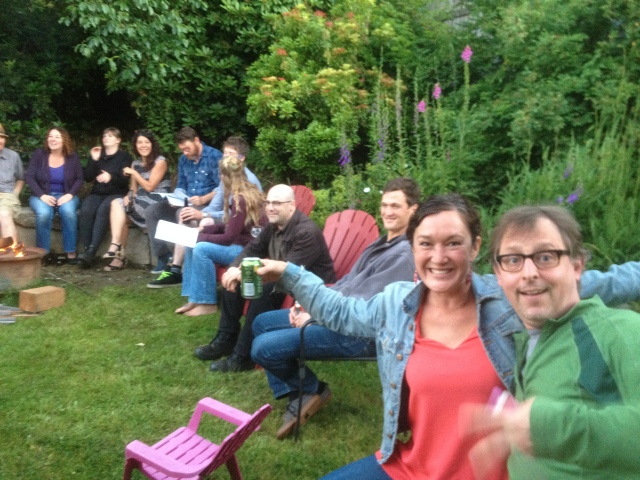 Other food news is we offered to be the drop off for the Merville Organics CSA this year and have been getting weekly bins of locally grown goodness. For the first 3 weeks there was some confusion and at least one person didn’t pick up their bins so we were ending up with double the food fun but things are going like clockwork now. It really gets you going creatively when your bin has 3 cups of tarragon in it. I learned how to make Green Goddess dressing. 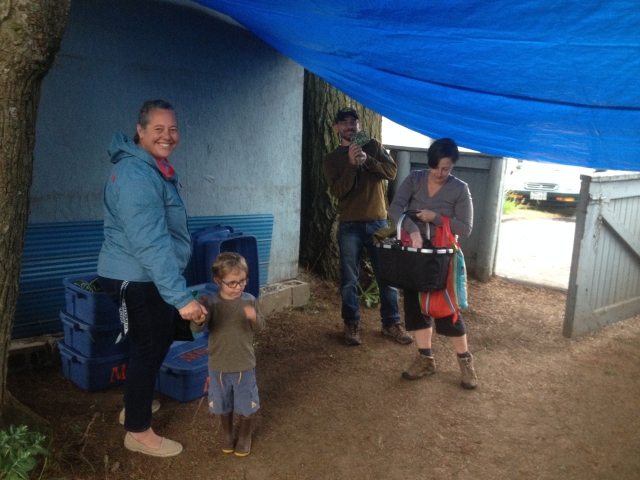 Families Pick Up Their Merville Organics CSA Bins. What Will They Do With Their Tarragon?

You’d think with all this fresh, organic goodness I would be eating a healthy breakfast, but half the days I eat bacon and the other half I eat orange juice with liquorice from the Liquorice Parlour in Vancouver. Tiger’s Tail! Healthy! I am not a practical person.

Cumberland Has a Farmers’ Market, Now. 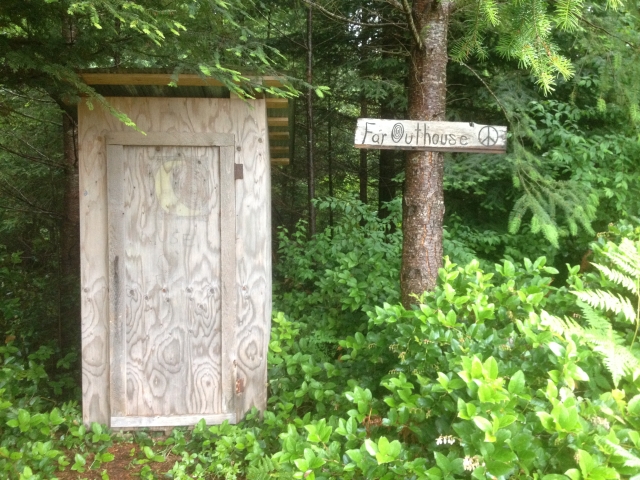 If You Visit Bruce and LeeAndra, Your Food Could End Up Here.

1 Response to More Going On and On About Food